Several factors are spurring this growth, including regulatory policy, more corporate demand for clean energy, and technological innovation that continues to reduce the cost of renewables. Energy analysts have said that utility-scale solar projects are being built at 90 to 95 cents per watt, which was inconceivable only two years ago. And analysts say that cost will soon fall below 85 cents per watt.

At the same time, concentrating solar power (CSP) technology is increasing in energy density and overall output. One key to innovation is the performance of tracking gear drives that enable heliostats to focus more sunlight on receiver towers (power towers) more reliably.

Considering the enormous scale of a typical CSP plant, even a fractional improvement in heliostat aiming accuracy can prove quite significant. The Timken Company’s Cone Drive technology enables precise tracking of the sun’s movements, balances heliostat performance and system cost, and helps with the need to reduce long-term maintenance spending.

The technology is being proven at the Ivanpah Solar Electric Generating System (Figure 1) project in the Mojave Desert in California. Ivanpah, developed by BrightSource Energy, is one of the world’s largest CSP installations. Timken’s double-enveloping worm gear technology is helping power the 377-MW complex, which began operating in 2013 and was recognized as POWER’s Plant of the Year in 2014. The cone drive operation ensures Ivanpah’s nearly 174,000 sun-tracking heliostats are carefully calibrated to optimize energy capture. 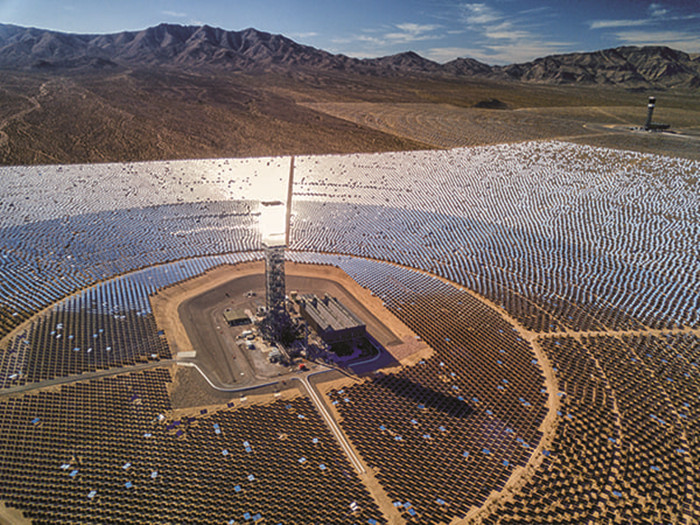 BrightSource’s expansive site uses dual-axis drives for heliostats to reflect solar beams onto receiver towers where molten salt is superheated to nearly 1,000F, in turn powering steam cycles that drive electricity-generating turbines. Absolute precision is paramount to ensure the sun’s light stays tightly focused on the towers—targets measuring no more than three square meters in size at a distance up to 2,000 feet away.

At Ivanpah, harsh conditions make aiming accuracy even harder to achieve. Desert windstorms can pack peak gusts of 190 miles per hour while assaulting the site with sand and debris. For a heliostat to maintain its exact position and offer dependable performance despite these challenges requires a special feat of mechanical engineering.

Heliostats saw extensive research and development in the 1980s with the azimuth-elevation tracking pedestal type emerging as the predominant design (also known as an azimuth-altitude design, where the heliostat operates on a primary vertical axis and secondary horizontal axis). Today, this design remains the most common in commercial CSP plants and is preferred for its high range of motion and optical efficiency.

In 2009, at the onset of the Ivanpah project, Cone Drive saw a unique opportunity to leverage double-enveloping worm gear technology to achieve a high degree of aiming accuracy in azimuth-style heliostats. In a single-enveloping cylindrical worm gear, there is only partial engagement between the worm thread and the gear teeth. A double-enveloping design, by comparison (Figure 2), matches the curved profiles of the gear teeth to the circular profile of the worm thread, allowing substantially more contact to occur between the thread and the teeth. 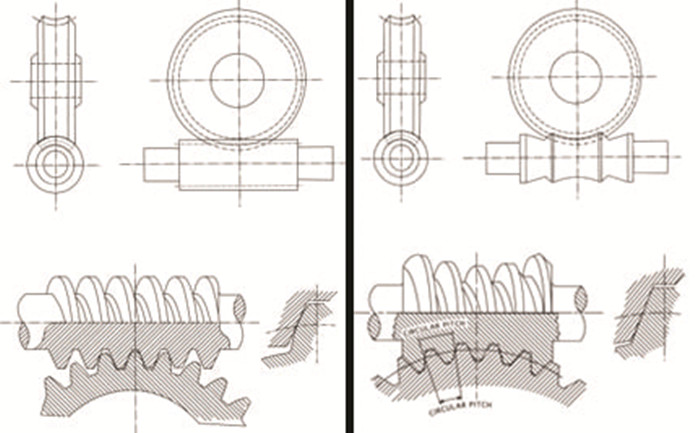 2. Standard cylindrical worm gearing (at left) offers only partial engagement with the worm, while a double-enveloping design (right) increases the contact area (up to eight times) to eliminate gear backlash. Courtesy: The Timken Company

By increasing the contact area, the rotational clearance (the gap) between mating gear teeth is reduced, thus reducing gear backlash, which cannot be tolerated in precision applications such as satellite-pointing and surgical-positioning systems. In a solar tracking drive, backlash can introduce oscillations that undermine system stability and thus aiming accuracy. Ivanpah’s heliostats rotate 270 degrees or more per day along the azimuth drive, and these rotations (as slow as 0.009 rpm) must be incredibly precise to maintain optimal optical alignment (angle of incidence) with the sun and receiver towers simultaneously.

Over time, backlash growth can further result in tracking drive performance degradation, making it mission-critical to control the wear of the gear set. For these reasons, a double-enveloping worm gear drive can offer the dual benefit of bolstering heliostat system stiffness while reducing the potential for costly repairs.

Following a thorough evaluation of various tracking gear drive systems, BrightSource awarded Cone Drive a large portion of the Ivanpah project. In the nearly six years since operations commenced at Ivanpah, Cone Drive’s double-enveloping worm gear drive solution has met BrightSource’s expectations for a highly accurate and reliable solar-tracking drive. Installed in tens of thousands of heliostats at the site, the gear drives provide high-precision motion control (Figure 3). The product is designed to be maintenance-free for 35 years. 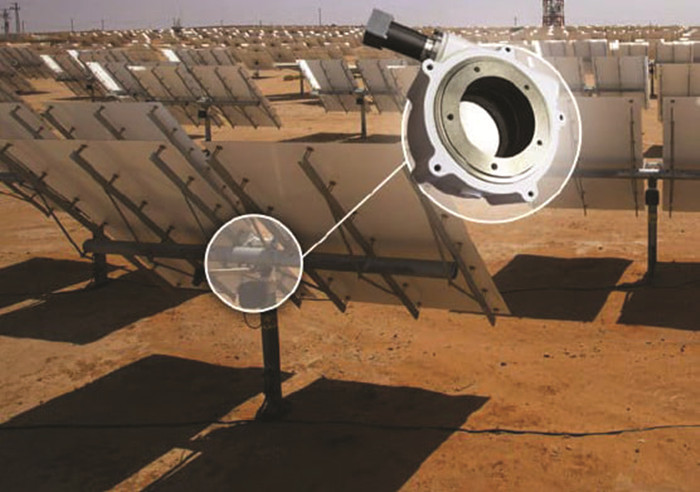 Beyond Ivanpah, BrightSource is employing Cone Drive technology at a new 700-MW CSP plant in the United Arab Emirates (UAE) that is currently under construction, as well as at the Ashalim Solar Thermal Power Station, located in Israel’s Negev desert, where more than 50,000 heliostats help supply clean energy to 120,000 homes. The Ashalim facility is notable for its 240-meter-high power tower—the tallest in the world.

Leveraging global engineering and manufacturing capabilities to deliver stronger motion control solutions is evidence of how manufacturers like Cone Drive by Timken can uplift the solar power industry, which is ripe for innovation. Much like heliostat aiming efficiency, small, incremental technology improvements can add up to tremendous gains amid soaring interest in renewable energy sources.

—Jacob Randall is director of Strategic Markets at Cone Drive, which provides precision motion control technology for diverse markets including solar, automation, aerial platforms, and food and beverage. The company in the renewables market produces gear sets for trackers that position solar panels.