What is Concentrated Solar Power?

Concentrated solar power (CSP or solar thermal power) is a way of generating electricity from the sun. CSP systems don’t use traditional solar photovoltaic panels. Instead, they use mirrors to concentrate sunlight on a single point, known as the ‘receiver’. The receiver then passes this energy to a fluid which produces steam to drive a traditional turbine.

There are three main types of concentrated solar power (CSP) plants. All of these use mirrors to focus solar energy on a central receiver. Let’s take a look at the different types to get a better idea of how they work.

This type of solar thermal power plant features a tower that houses the receiver. Mirrors around the tower point towards the receiver at the top. These mirrors are able to collect sunlight, beaming it to the receiver. 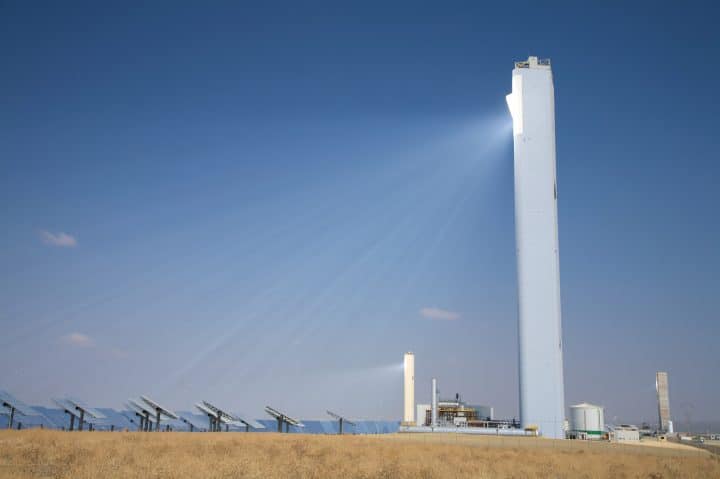 As concentrated solar rays hit the receiver, heat is transferred to a fluid. The fluid feeds into a heat exchanger where it transfers its heat to water. The water then boils and produces steam which can drive a turbine. The turbine can then transfer its kinetic energy to a generator in order to produce electricity.

This type of concentrated solar power plant uses troughs of mirrors in a parabolic shape. Protruding from the center of the trough is the receiver – a pipe containing a heat transfer fluid. 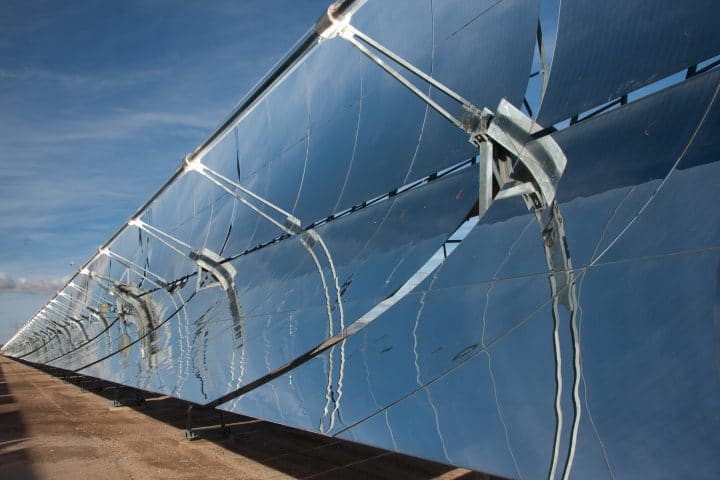 As the heat transfer fluid flows through a network of parabolic troughs, it picks up heat. The fluid can reach high temperatures of around 400°C (approximately 750°F). One of the drawbacks of this type of system is that the troughs are static and do not track the movement of the sun.

Once the fluid is at the right temperature, it can be fed into a heat exchanger. Here, it passes its heat to water which in turn produces the steam to drive the turbine.

Parabolic dishes comprise of many mirrors that are focused on a receiver that protrudes from the center of the dish. They look similar to satellite dishes and help to amplify solar radiation towards the receiver where a heat transfer fluid is waiting 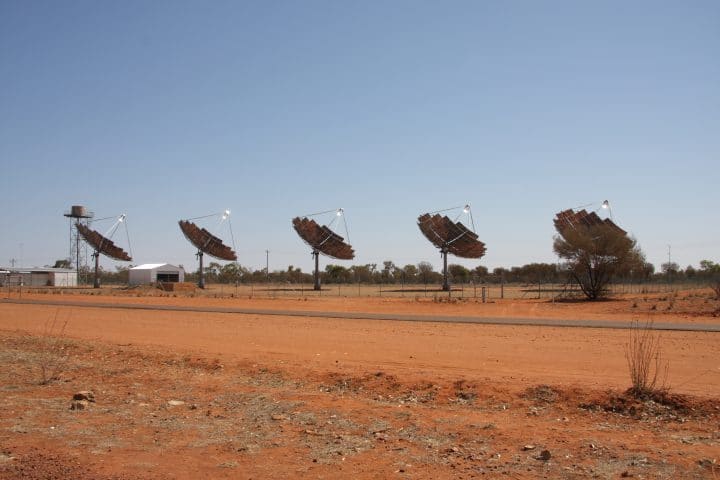 A row of solar thermal parabolic dishes on a solar energy farm in Queensland, Australia.

Using a parabolic dish is more effective than a parabolic trough. As a result, this type of solar power plant can reach higher temperatures of around 750°C (approximately 1,380°F). Most parabolic dishes also track the sun across the sky during the day, helping to increase efficiency.

Parabolic dish solar power plants don’t normally use the heat transfer fluid to produce steam. Instead, they use it to drive pistons inside a Stirling engine. The kinetic energy of the engine is then used to drive a generator in order to produce electricity.

Solar thermal power requires sunlight to be concentrated on a focal point (the receiver). Receivers transfer heat to a fluid that can be used to drive a traditional steam turbine or a Stirling engine.

Solar thermal power plants are different from domestic solar thermal energy heating systems. They are not usually found in a domestic setting – instead, they are mostly used on an industrial scale by utility companies.