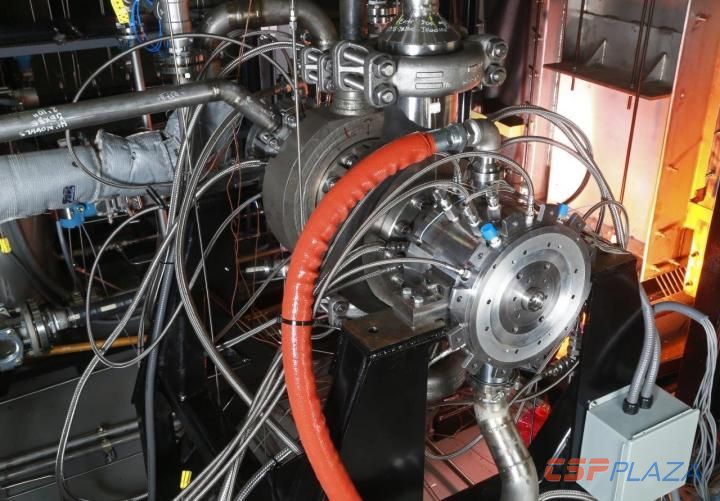 The 10 MW turbine is the "size of a desk" and has yielded the highest power density for an industrial turbine, rivalled only by turbopumps used on space shuttle engines, SWRI said.

The sCO2 power cycle turbine achieves a thermal efficiency of almost 50%, compared with 35 to 40% for conventional CSP systems.

Greater thermal efficiency of the power cycle is key to lowering the levelized cost of energy (LCOE) of CSP plants. The Department of Energy (DOE) has set a cost target of $50/MWh for CSP plants with 12 hours storage by 2030, down from an estimated $103/MWh in 2017.

"Getting to 50% thermal efficiency accounts for approximately one-fifth of the progress we need to make in lowering the LCOE,” Avi Shultz, CSP Program Manager at the DOE's Solar Energy Technologies Office (SETO) told New Energy Update.

SCO2 power cycles achieve supercritical state by pressurizing and heating the CO2 until it behaves like gas and liquid. The turbine developed by GE and SWRI is able to withstand temperatures as high as 715 degrees C and pressures approaching 3,600 pounds per square inch.

Studies showed the turbine could be "scaled up to 450 MW in single casing,” Hofer told New Energy Update. 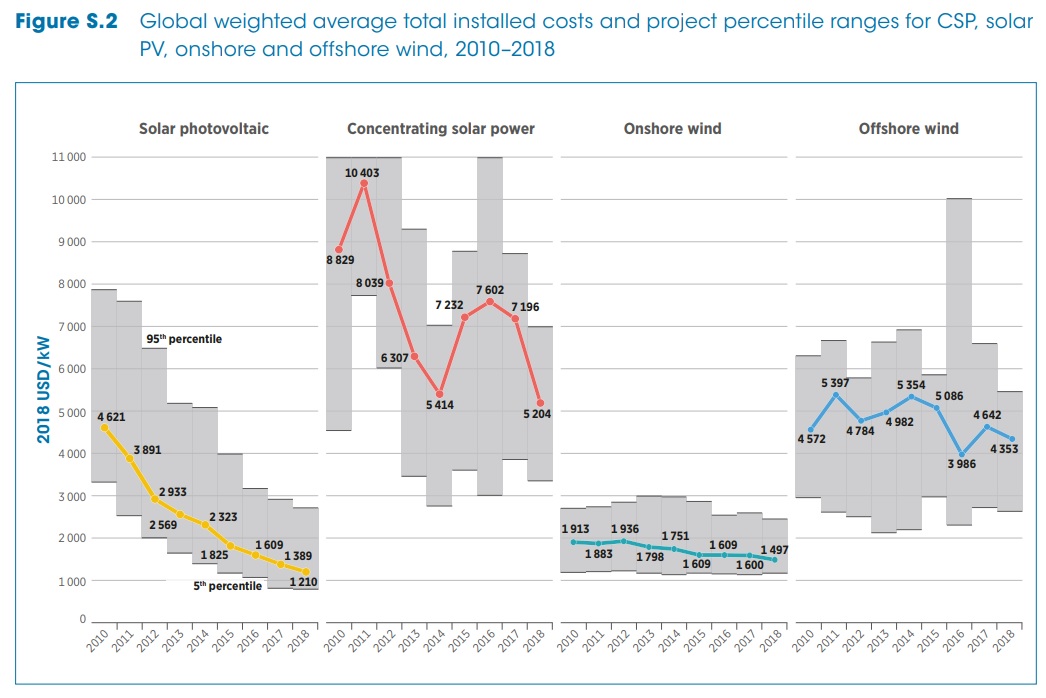 “CSP plants using state-of-the-art molten salt power tower design should be able to transfer directly to sCO2 as the working fluid,” he said.

France's EDF and China's Shouhang have started a project to convert the steam cycle at the 10 MW Shouhang Dunhuang Phase I CSP demonstration tower project in the Gobi Desert to a sCO2 power block. The project is the first to install a sCO2 power cycle in an operating CSP plant and is reportedly due for completion by the end of 2020.

The lowest CSP plant prices to date have been achieved by large-scale projects with favorable development frameworks.

Larger projects create significant investment challenges. ACWA Power's giant 950 MW Noor Energy 1 CSP-PV project in Dubai is expected to cost $4.4 billion and this will be met by around $2.9 billion of debt and $1.5 billion of equity. The project will include 700 MW of CSP and 250 MW of PV capacity and was awarded a record-low tariff of $73/MWh in 2017.

The performance profile of sCO2 power cycles means they can maintain relatively high efficiency, even for plants of capacity below 100 MW, Shultz said.

"Smaller, lower capital-cost plants of 50 MW or smaller may be able to achieve efficiencies that, with steam turbines, only very large plants can achieve now,” he said.

High efficiency at smaller size could open up new market opportunities and benefit developers looking to gradually build up their CSP portfolios.

The latest breakthrough in turboexpander and turbine design must be accompanied by wider component development ahead of commercial deployment, Shultz said.

“Other projects funded by SETO and DOE are looking at other key parts of the system, including the compressor, recuperators, bearings and seals, as well as the primary heat exchanger, which will bring the required heat from thermal energy storage into the turbine,” he said.

Design studies have shown that “heat exchangers, not the turbine, are the limiting components for transient operation,” Hofer noted.

A group of U.S. university researchers recently developed a heat exchanger made from a new ‘cermet’ (class of materials made of ceramic and metals) which could be used in high-temperature SCO2 plants. The researchers proved the cermet heat exchanger is far stronger and more durable than the current steel and nickel-based designs.

The GE research group will install a variation of the sCO2 turbine in the Supercritical Transformational Electric Power (STEP) 10 MW demonstration plant, a pilot sCO2 plant currently under construction at SwRI’s headquarters in San Antonio.

Other research teams in U.S. and Europe are also developing new high-temperature designs in a bid to boost efficiency.

In the U.S., three research teams are developing designs which heat transfer fluids (HTFs) to over 700 degrees Celsius (C), under the Generation 3 CSP program.

The groups are competing for $25 million of DOE funding to build an integrated demonstrator and commercial exports could begin in the 2020s.

“High-temperature systems are still several years away from commercial deployment and require the successful outcomes of current initiatives to de-risk the key components and illustrate that these systems can function as intended,” Shultz said.

China International CSP Conference（CPC2019） is to be held  on 10-12,July,in Suzhou, China. During the conference, global CSP professionals will conduct in-depth exchanges with each other about the application of sCO2 power cycle in CSP projects.