A high-level delegation from the Ministry of Innovative Development of Uzbekistan has visited the Mohammed bin Rashid Al Maktoum Solar Park, where the Dubai Electricity and Water Authority, DEWA, team highlighted the emirate's experience in developing the renewable and clean energy sector, reducing the consumption of natural resources, and finding alternative solutions to traditional energy sources.

The delegation, headed by Olimjon Tuychiev, Deputy Minister of the Innovative Development, was received by Jamal Shaheen Al Hammadi, Vice President of Clean Energy and Diversification at DEWA, and Faisal Riyadh Albirdisi, CEO of Shuaa Energy 1. 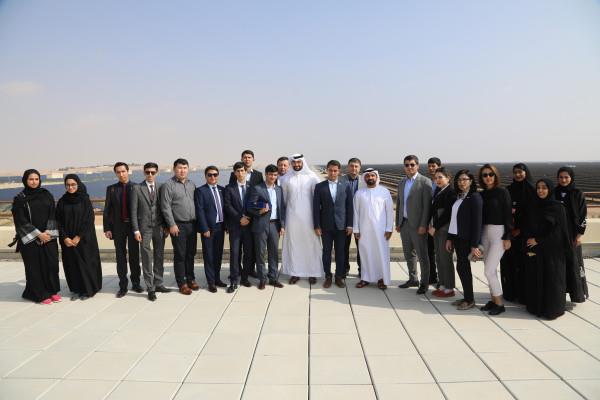 Saeed Mohammed Al Tayer, Managing Director and CEO of DEWA, said, "One of our priorities is ensuring a sustainable supply of energy and water by diversifying energy sources. In this regard, the Dubai Clean Energy Strategy 2050 was launched to provide 75 percent of Dubai's total power output from clean energy by 2050 and to make Dubai the city with the lowest carbon footprint in the world."

He added, "The most important clean energy project is the Mohammed bin Rashid Al Maktoum Solar Park, the largest single-site solar park in the world based on the Independent Power Producer, IPP, model, with a planned capacity of 5,000MW by 2030 and a total investment of AED50 billion. When completed, it will reduce approximately 6.5 million tonnes of carbon emissions annually and provide thousands of jobs in clean energy and the green economy."

The 13MW first phase of the solar park became operational in 2013 using photovoltaic solar panels. The 200MW photovoltaic second phase was commissioned in March 2017. The DEWA is currently developing the third phase with a capacity of 800MW, as the first-of-its-kind in the Middle East and North Africa to use an advanced solar tracking system. This will increase generation efficiency by 20 to 30 percent as compared to fixed installations. The third phase using photovoltaic solar panels will be completed in 2020.

The fourth phase is the largest single-site solar IPP project in the world that combines CSP and photovoltaic technology with a capacity of 950MW.

The 900MW fifth phase uses photovoltaic solar panels based on IPP. This phase will become operational in stages from Q2 of 2021.

The R & D Centre at the solar park focuses on four key operations, including producing electricity from solar power and other clean energy technologies, the integration of smart grids, energy efficiency, and water.