Concentrated solar power and nuclear power may appear to be extremely different energy sources. Nuclear power originates from the energy discharged when neutrons crash into uranium atoms, splitting them apart.

Solar power originates from the sunlight shining down on earth. However, a few concentrated solar power plants turn that light into heat, which can be utilized in the same manner as the heat of a nuclear reactor to produce steam to create electricity. Also, both energy sources frequently share a core ingredient: salt.

Occasionally, engineers have used molten salt to fuel and cool nuclear reactors. As nuclear fuel, salt is appealing as it endures radiation and can work at near-normal pressure and comparatively low temperatures.

Salt also stays moderately inert and stable within the nuclear fuel cycle. At present, engineers from the U.S. Department of Energy’s (DOE) Argonne and Oak Ridge national laboratories are relying on several years of nuclear research on salts to progress a solar technology known as concentrating solar-thermal power (CSP).

Turning up the heat

CSP works when mirrors reflect and focus sunlight onto a receiver, which traps the light, changing it into heat stored in a hot fluid. Akin to power sources, such as fossil and nuclear fuels, that heat turns turbines, producing electricity.

Researchers are aiming to make CSP more efficient and economical than competitor technologies. Commercial CSP power plants, such as the revolutionary U.S. Crescent Dunes Solar Energy Project, produce and store electricity by heating molten or liquid nitrate salts to 565 °C. But that temperature limits the efficiency of the system and makes it hard for decreasing production costs.

Of late, researchers are looking at chloride salts, which can be heated up to 750 °C. At higher temperatures, CSP may deliver sufficiently high efficiencies to reach the target cost range—5 to 10 cents per kilowatt-hour, as opposed to 10.3 to 18.4 cents per kilowatt-hour today—of DOE’s Solar Energy Technologies Office (SETO) within the Office of Energy Efficiency and Renewable Energy.

To realize this goal, SETO is financing research at Argonne and Oak Ridge, as well as many other national laboratories and universities. 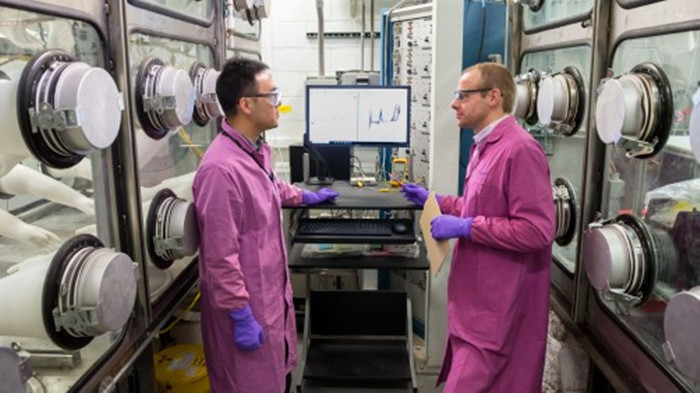 Regardless of its promise, high-temperature molten salt has the tendency to corrode a number of materials. “You need to control what’s going on in the salt to avoid corrosion and equipment failure,” said Nathaniel Hoyt, a chemical engineer at Argonne. He and Argonne team members Mark Williamson, director of the Chemical and Fuel Cycle Technologies division, and Jicheng Guo, a postdoctoral researcher, are trying to find a solution.

In 2018, the team joined a group of scientists from Oak Ridge, Virginia Tech, and the University of Utah who are designing a CSP prototype for high-temperature molten salt to test the concept’s performance. The role of Argonne is two-fold:

Get rid of salt impurities, such as hydroxychlorides and oxides that trigger corrosion

Argonne’s sensors compute electrochemical responses in the salt, evaluating its health, and detecting possible issues. When salt is exposed to water, for instance, hydrochloric acid is created in it, which can corrode the CSP system’s metal pipes. This corrosion leads to the presence of iron, chromium, and other structural metal ions in the salt, which can reduce the system’s long life.

Once the sensors spot impurities, the system automatically switches on a separate electrolysis system, which incorporates magnesium to the salt to eliminate the corrosive elements.

The technology is established on Argonne’s founding mission of investigating peaceful uses of nuclear energy. Several years of work with high-temperature molten salts have resulted in significant progress in reactor designs and pyroprocessing, a technique of recovering and reusing nuclear fuel that was established at the laboratory, stated Williamson.

The research is also part of a larger, five-year program sponsored by SETO, called Gen3 C.