One of Abengoa’s main objectives is to increase the competitiveness of renewable energies, especially of solar thermal technology. The Scarabeus project, funded by the European Commission, seeks to achieve this goal by introducing novel supercritical CO2 cycles in solar thermal plants. 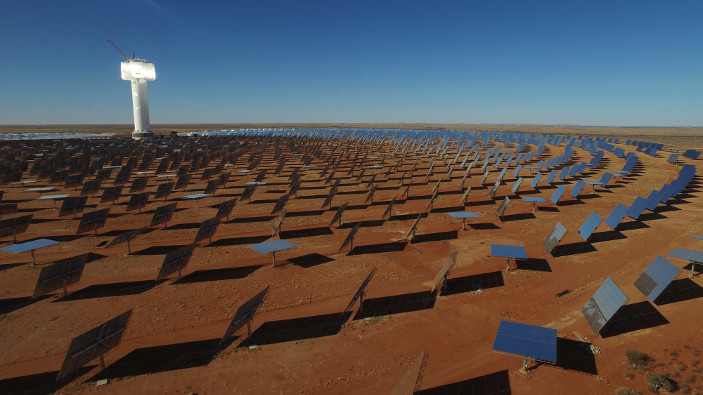 Today, efficiency values have already been reached in solar thermal plants that are very difficult to improve with the current subcritical steam power cycles. The supercritical CO2 cycles are promising as it is expected to achieve efficiency values close to 50 %. The Scarabeus project explores the implementation of these cycles in solar thermal plants, providing innovative ideas that allow a significant cost reduction in electricity generation with this technology.

“The development of new mixtures manages to improve the operating range of the supercritical CO2 cycle, reducing the cost of the technology.

The Scarabeus project aims to validate a supercritical CO2 cycle at pilot scale. In addition, the project implements a further improvement in fluid conditions, by introducing blends in the CO2 that allow optimizing the working range of the supercritical fluid. The new mixtures will raise the dew point of the fluid at higher temperatures, allowing the use of air-cooled condenser, reducing costs and optimizing the overall performance of the solar thermal plant.

The scope of project, which is funded by the European H2020 program, is the reduction of the CAPEX by 30 % and OPEX by 35 %, taking advantage of the reduction in the size of the equipment, the possibility of increasing the operating temperature and the improvements in equipment that are expected to be obtained within the 48 months of the project duration.

“Abengoa participates in the project along with eight other partners, including universities and companies, from six different countries.

The role of Abengoa in the consortium, formed by four companies and five universities in total, is mainly focused on the solar integration of all the equipment, the techno-economic analysis of the plant and the exploitation of results. For this, the consortium has all the know-how accumulated by the company in its more than 15 years of construction and operation of solar plants around the world.

Abengoa maintains, thanks to projects like this, its leadership position in the field of R&D, a fundamental pillar on which Abengoa has always based its development.