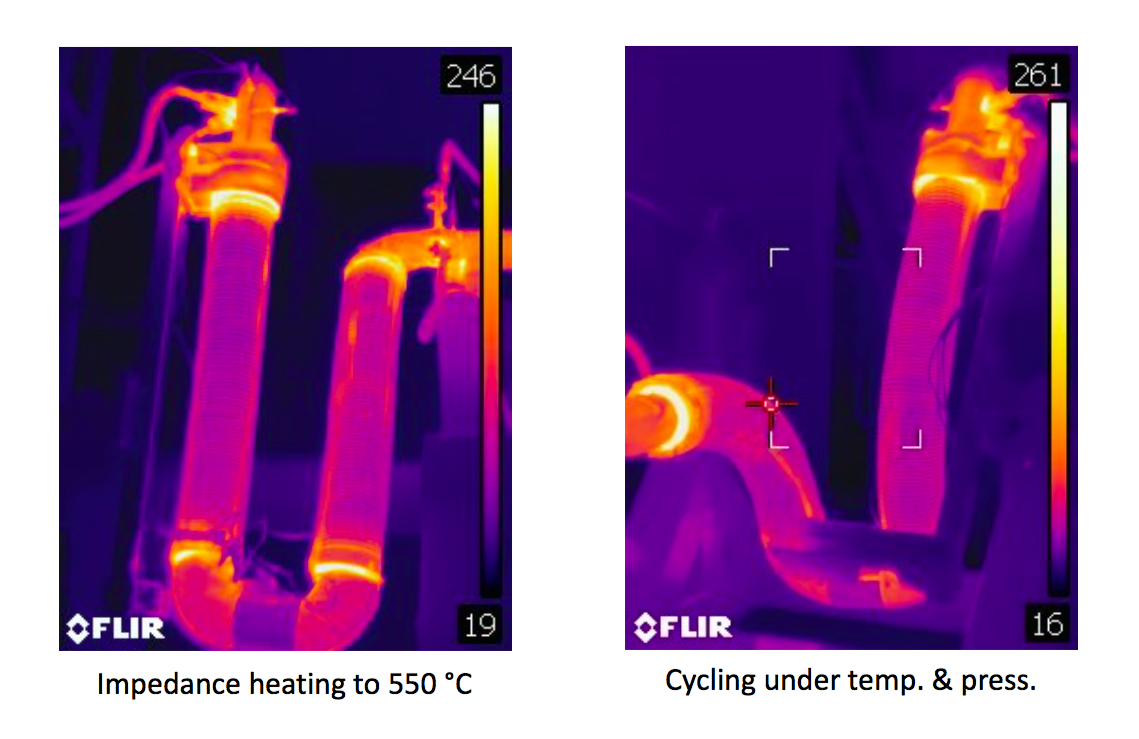 One conundrum for the two main Concentrated Solar Power (CSP) technologies is how to be both bankable and efficient.

Parabolic trough CSP is often considered more bankable, while central tower plants are more efficient. Trough technology is about a decade older than tower and has built up experienced supply chains, making it more bankable, which reduces the cost to build. However, trough typically uses oil as the heat transfer fluid, which has a lower operating temperature below 400°C, which reduces the operating efficiency. (How CSP works; tower, trough, Fresnel and dish.)

Many tower plants use molten salts as the heat transfer fluid, which makes it possible to run at temperatures up to 565°C. This allows for a wider operating range between hot and so-called “cold” (290°C), making tower CSP more efficient – once operating. But siting and financing the much less-proven tower technology is more difficult.

So what if the more bankable trough technology could run on molten salt, like the more efficient tower CSP? Wouldn’t that leverage the best of each technology?

SolarPACES spoke with Ryan Shininger at SolarDynamics, where a testing team from an international group of researchers that includes the National Renewable Energy Laboratory (NREL) is testing some novel solutions to the challenges that must be overcome to make this work. He presented the test results at the SolarPACES Conference in Korea: Flexible Hose Interconnect Testing for Parabolic Troughs with Nitrate Salt.

The promise of molten salts for trough

“There is absolutely a very large cost advantage to salts in a trough plant, compared to oil, in terms of the efficiency gain that you get by operating at a higher temperature,” he said. He described the engineering challenges of using molten salts in trough.

While a tower plant circulates its heat transfer fluid within a single tower to be heated by reflected sunlight onto a single focal point atop the tower, a parabolic trough plant must circulate its heat transfer fluid through literally miles of small pipes a few inches in diameter (often 90 mm) throughout the solar field. And the different configuration results in a mechanical problem to solve in adapting molten salts to trough.

“The parabolic trough has to rotate and therefore the pipe has to rotate,” Shininger pointed out. “It has to have some means of movement, so a trough collector will require some form of flexible joint or interconnect between the header piping and the rotating collector. There’s different ways of doing that. When the heat transfer fluid is oil, these can be ball and socket joints, because that allows pipes to rotate.”

However, unlike oil, molten salt is a liquid that will leak through every possible path it can find. So a ball and socket joint is impractical.

A flexible hose is another interconnect solution that has been used in the past. Flexible hoses are an obvious answer to allow a collector to rotate and let molten salts through, and there have been many tests over the past decade or two to try it out.

“A flexible hose has an advantage in that there is no path for the molten salt to come out other than if the flex hose itself fails,” Shininger said. But various types of flexible hose configurations have failed their mechanical integrity tests. “The interconnect has been kind of the Achilles’ heel in salts trough technology. The question is the mechanical integrity.”

Now SolarDynamics has done independent testing of a new design from Senior Flexonics GmbH, and they were able to demonstrate the new approach to work, with no mechanical fatigue failures for a record mechanical lifetime. The solution limits the amount of bending in each flexible hose to under 90 degrees, and in just one direction.

The goal was to complete accelerated cycle testing to demonstrate at least 10 years of mechanical life (3,650 cycles), and it over-performed that target. At the simulated loop inlet, 10,200 cycles were able to be completed at 305°C and 31.5 bar; the equivalent of over 28 years of life. At this point a leak occurred. At the simulated loop outlet the test withstood 11,440 cycles at 550°C and 14.0 bar pressure, representing over 30 years without any failure.

However, small indoor lab-scale tests have their limits. For real world results, the next step is to test this approach outdoors where it will be subject to daily temperature and pressure cycling and stress corrosion cracking in ambient weather conditions at life size. For this they will use a SolarDynamics parabolic trough collector being installed at the SolarTAC test site in Colorado. The solar trough unit is 21 m long, with an 8.2 m aperture to the collector pipe. SolarDynamics expects to show results by the end of 2020.

Molten salts are heated by the sun like oil, but unlike oil, molten salts begin to freeze under 238°C at which point they begin to crystalize. This is a concern in trough, because the heat transfer fluid in small 90 mm diameter piping must carry the heat from throughout the solar field a considerable distance back to the power block.

“How you stop the salts in such a narrow pipe from freezing is the other challenge,” he said. “At some point over the 30 year plant life, you will have a salt freeze event, whether it is widespread or local. Our approach is that you must be able to recover from it and continue operating. We aim to demonstrate that if it freezes, you can recover without incurring substantial damage.”

What’s needed is a method of adding heat to the collector pipe system. So SolarDynamics came up with the concept of a mobile electric heater. If you had a freeze event you could drive the mobile unit out and hook it up where you need it to thaw out the pipe. This concept would have the effect of increasing the bankability of molten salts in trough, as the potential for long term outages due to freezes in this combination has been a concern.

The way the mobile unit heats the molten salts is using the the pipes as an electrical resistance element like a toaster coil. When an electric current is passed through the pipe, it heats up, distributing heat through the line. A CSP plant could have several of these mobile units to work simultaneously on different parts of the solar field, so that it would be able to thaw even an entire solar field in a relatively short period of time. These mobile units could even be owned and run by outside contractors to serve multiple CSP plants.

“This is a much more cost-effective solution for something that you may only need to use a few times over thirty years,” he noted. “You could almost think of it like jumpstarting a car where you have a power source and at each end of the loop and applying electricity to the pipe to generate the heat and that is what thaws the salts”

The electricity the units use would be part of the routine parasitic load common to all thermal power plants like CSP, such as for lighting and to rotate solar collectors.

The team is also modeling the use of a second way to augment this local heat, this time using the direct solar heat already employed in a CSP plant by the reflected sunlight to make the design work faster and at lower cost.

“You can’t hold the reflector on-sun too long because it will overheat in spots but you could pass it through focus and then you could pause that focus for a while and then move it on,” said Shininger.

So in their upcoming field tests in Colorado, the team will also subject the full size SolarDynamics collector module to freeze recovery testing, using this mobile heating unit idea. The test, which is funded in part by the US Department of Energy, will analyze how well all the components behave in freeze / thaw cycles.