Every year, solar thermal energy strengthens its position as an essential technology for facing the energy transition, being the key factor in its potential for thermal energy storage beyond the hours of sunlight.

We must go back to the beginnings of solar thermal energy, specifically with the Royal Decree 661/2007, when the starting signal was given to solar thermal development which placed Spain and its companies as a world leader in this technology. The upward trend was evident and in barely just 5 years more than 2 GW (2,300MW according to data provided by the Protermosolar association) were installed in Spain, which today still represent a third of the world's capacity.

Since then, Spanish companies have participated in practically every project under operation or construction in the world.

In June 2018 Protermosolar presented a report showing that, with a portfolio of solar energy generation divided between PV and solar thermal, it would be possible to meet demand in 2030 at all times of the year, without coal or nuclear power plants, with lower emissions and with a smaller portfolio of combined cycles that would contribute only 3% of the yearly electricity generation.

In the last article published by Grupo T-Solar about solar thermal energy, Spain was preparing the two main legislative pillars of its future energy policy: The Climate Change and Energy TransitionLaw and the Integrated National Energy and Climate Plan (PNIEC) 2021-2030, which defines the objectives of reducing greenhouse gas emissions, the penetration of renewable energy and energy efficiency.

According to Protermosolar, the processing of the Climate Change and Energy Transition Law "will allow decisive progress towards the decarbonization of the economy by facilitating an optimal combination of all renewable technologies, meeting the objectives of the PNIEC and the European Green Pact". It should also be noted that the PNIEC has planned the installation of 5,000 MW of solar thermal technology up to 2030. The benefit ofthis electricity system solution is that it will allow a significant increase in synchronous renewable energy production.

For this associationthe law must differentiate tenders by technologies or by functionalities that allow to respond to the needs of the system. "Renewables are very different from each other and only in a planned way it will be possible to achieve the best combination of them, which will allow the reduction of emissions at minimum cost", it points out in this respect.

There is no doubt that the solar thermal power plant has a great potential for growth due to its capacity for thermal energy storage, which allows it to be dispatched conveniently in cloudy periods and even at night; in addition to its dynamic effect on the economy, local employment and, due to its track record on cost reduction, being one of the technologies that have become one of the cheapest in recent years, up to a 47% reduction according to recent studies.

An electricity system without storage or hybridization, and with an excessively high penetration of intermittent renewable energy could be asymmetrical in the sense of nearly inexistent daytime pricesopposed to very high nighttime prices, caused by the needed plants to support the system, with few hours of operation per year.

The good figures for solar thermal in 2019 further reinforce the importance of this technology. This technology once again exceeded 5 TWh of electricity generation in 2019 in Spain (total generation of 5,166 GWh), which represents an increase of 16.8% over 2018 and 3.8% over the average for the last 5 years. Its contribution to the electricity system was 2.1% on average, with occasional contributions of 10%. Spain currently has 50 solar thermal power plants under operation.

In March 2018, Grupo T-Solar acquired two solar thermal CSP plants with which it diversified and expanded its portfolio of solar power plants. Since the operation beganin 2012, the two plants have contributed more than 200 GWh-gigawatt hours per year to the grid, equivalent to the annual consumption of approximately 160,320 inhabitants. Grupo T-Solar's two operating solar thermal CSP plants are Olivenza 1 and Morón, located in Badajoz and Seville respectively. The first, Olivenza, has an installed capacity of 50MW and produces 103.8 GWh per year, covering 260 hectares. Similar figures are presented by Moron, in Seville, which has an installed capacity of 49.9 MW, with an annual energy production of 105.8 GWh and an extension of 210 hectares.

In a more technical aspect and with a focus on environmental responsibility, we include a note from one of the members of the Grupo T-Solar team, who tells us that in solar thermal technology, both hazardous and non-hazardous waste is managed, so that they are normally stored for a maximum period of 6 months in the waste management shed and then managed by an authorized official waste manager.

Furthermore, to give added value to certain waste (residual thermal fluid) and increase the performance of the process, it is sent to a company specialized in chemical product distillation, where, after the product has been recovered, it allows for the recovery of up to 70% of the product, in new product qualities certified by the manufacturer, all at a lower cost and allowing to increase the circular economy. 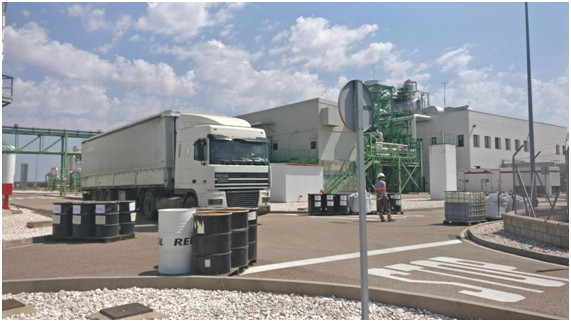 Returning to a more generic aspect of thermal solar energy, it should be noted that it is strengthening its position as an essential technology for facing the energy transition, thanks to the thermal storage already indicated and which all future plants could be equipped with, as well as some of the current ones, which were designed to expand them with molten salt thermal storage facilities, as is the case of the Olivenza 1 plant. Itis proposed to expand the plants with enough capacityforstorage systems of between 9 and 12 hours.These plants could begin dispatching power from the evening onwards, replacing part of the photovoltaic power plant production and reducing the need for fossil energy backup at night.

Protermosolar highlights that the current solar thermal installations, some of them with more than a decade under operation, continue to operate without giving signs of degradation and incorporating operating experiences that make them more efficient.

The availability of locations and capacity of the power plants means that "Spain, unlike other European countries, has the possibility of deploying this renewable, manageable andstorabletechnology, which will facilitate the achievement of the renewable energy and decarbonization objective set out in the PNIEC by 2030", affirms the association.

In Spain, this technology employs 5,200 people and contributes nearly 1.5 billion euros to the GDP. In terms of generation, the annual evolution has been the following: 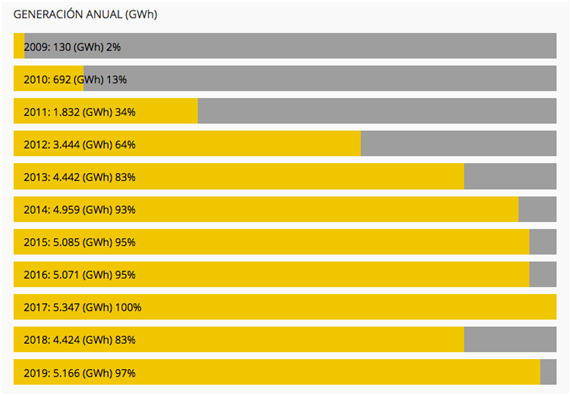 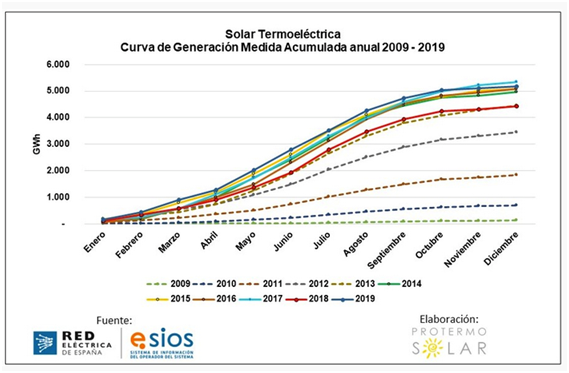 From a more economic point of view, the great attraction of this technology for investors should be highlighted. In February 2020, with the new tariff legislation, the news about the solar thermal sector was very encouraging, as the proven performance of solar thermal power plants and the growing need for storage to integrate wind and photovoltaic energy, was increasing investor confidence in concentrated solar thermal energy, according to affirmations New Energy Update for Helionoticias.

We highlight two important statements regarding investments in solar thermal energy in Spain by David Esteban, Vice President of EMEA (Europe, Middle East and Africa of Atlantica), in this same article: "Spain now has a stable regulation that provides investors with long-term visibility, confidence and clear rules of the game", "Solar thermal plants have an average remaining guaranteed income of 17.7 years".

Investors also see future value in solar thermal storage as the penetration of photovoltaic and wind energy grows. The Spanish government is preparing to set ambitious PV and wind energy targets and wants to revive the construction of solar thermal plants, doubling CSP capacity from 2.3 GW to 4.8 GW by 2025 and reaching 7.3 GW by 2030.

It should be noted that the fifty solar thermal power plants in Spain have continued to operate, since the beginning of the state of alert, producing renewable energy thanks to the protection measures taken, which have guaranteed total safety for their workers during the pandemic caused by Covid-19, according to Protermosolar.

We conclude with a reflection from the employers, which states that, despite the current moment of uncertainty, with low electricity market prices that no one had contemplated, and with foreseeable difficulties in balancing the accounts of the electricity system this year, there is a conviction that solar thermal technology is once again called upon to be a lever for growth in Spain.