Concentrating solar power (CSP) could play an increasingly significant role in generating electricity in the contiguous United States by 2050 if the technology’s levelized cost of electricity can be lowered to goals set by the U.S. Department of Energy (DOE) in 2016. In a new report, researchers at the National Renewable Energy Laboratory (NREL) used detailed modeling to estimate the impact of achieving DOE’s 2030 solar cost targets, with an emphasis on CSP systems. The results suggest that at such costs, CSP could play a major role in the U.S. energy system. 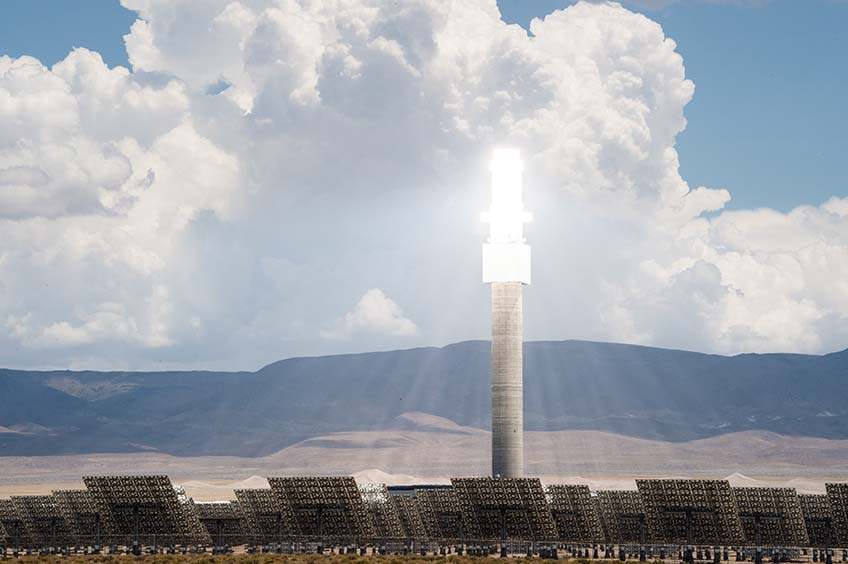 July 23, 2017 – Over 10,000 tracking heliostats focus solar energy at the receiver on the 640 foot power tower at the Crescent Dunes Solar Thermal Facility, owned by SolarReserve. The facility, built with US sourced steel, glass and technology, provides more than 500,000 megawatt hours of electricity per year, available day or night through molten salt storage. (Photo by Dennis Schroeder / NREL)

“At 5 cents per kilowatt-hour by 2030, DOE has chosen an aggressive target for CSP,” said Mark Mehos, the CSP program manager at NREL and co-author of the report. “As greater levels of variable renewables, such as photovoltaics and wind, penetrate U.S. markets, the need for storage will grow. And CSP with built-in thermal energy storage can help fulfill that requirement.”

CSP plants use mirrors to concentrate sunlight and heat a heat-transfer fluid. The heated fluid can then be used to spin a turbine to generate electricity immediately or be held until needed, serving as a form of large-scale thermal energy storage

To estimate the impacts of achieving the $0.05/kilowatt-hour 2030 cost target set by DOE, NREL researchers used the Regional Energy Deployment System (ReEDS) model. ReEDs starts with a set of input assumptions and estimates the least-cost solution for the type and location of future generation and transmission capacity in the U.S. power system. The model represents a wide array of electricity generating and storage technologies, and it is specifically designed to represent the time and location value of renewable generation technologies in detail.

The team modeled generation mixes in the United States out to 2050 for a range of scenarios, starting with a baseline scenario that assumes business-as-usual trends in technology costs. Other scenarios considered various combinations of aggressive cost and performance improvements for CSP, photovoltaics, and energy storage systems.

The researchers also explored the sensitivity of their results to a variety of market and resource conditions, such as varied natural gas prices, amounts of future electricity demand, and assumptions about the cost, performance, and lifetimes for other generator types. None of the scenarios should be interpreted as forecasts; rather, they provide insight into the potential impacts that achieving DOE’s cost targets for solar technologies—in isolation—could have on the bulk power system.

In all the scenarios, photovoltaics (PV) plays an increasing role in the capacity and generation mixes. But for CSP with thermal energy storage (CSP-TES), its role expands only if its 2030 cost targets are realized. Across the main set of scenarios in which the CSP-TES 2030 cost target is achieved, CSP-TES accounts for 1% to 10% of total installed capacity in 2050. And because of the high capacity factor of CSP-TES plants deployed in these scenarios, between 3% and 16% of electricity generation is delivered by CSP plants in 2050. The modeling showed that CSP deployment is most sensitive to the future price of natural gas, where a more limited natural gas resource could result in even higher penetrations of CSP-TES.

In the low-cost CSP-TES scenarios, the geographic range in which CSP was viable also expanded. “Historically, CSP has been considered a technology deployable only in the southwestern states. But in a scenario where both CSP and PV achieve their 2030 cost targets, we see the potential for penetration of CSP in Texas and the southeastern states as well. Texas in particular might be low-hanging fruit for CSP given the relatively attractive solar resource in the state,” said Mehos.

The report also found that achieving DOE’s 2030 solar cost targets could help lower electricity prices relative to the baseline scenario. In addition, water usage and air emissions could be reduced if the cost targets are achieved.