The cloud camera system WobaS predicts the solar radiation in the next fifteen minutes. The system has been developed by the DLR Institute of Solar Research together with CSP Services GmbH and TSK Flagsol Engineering GmbH. It provides temporally and spatially highly resolved information on the solar irradiance based on several cloud cameras. The software in the control room of the power plant can then derive the expected available energy and adapt the operation. 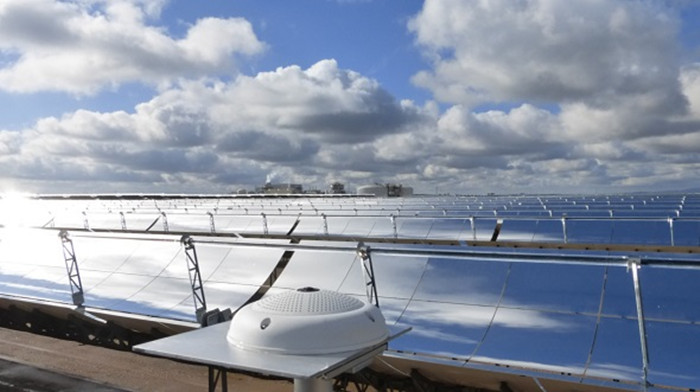 The nowcasts are valuable in two ways for a CSP power plant (Concentrating Solar Power = CSP). For example, to avoid thermal stress on components as a result of extreme temperature changes, the control system has the option of defocusing the collectors. Refocusing takes time, wasting valuable solar energy. WobaS enables to control the power plant proactively without defocusing and losing any energy. «The integration of such a forecasting system in a parabolic trough system allows us, for instance, to regulate the flow of heat transfer medium in the power plant such, that all collectors remain focused even with fluctuating solar radiation. Thus they achieve the best performance», reports project manager Dr. Tobias Hirsch. 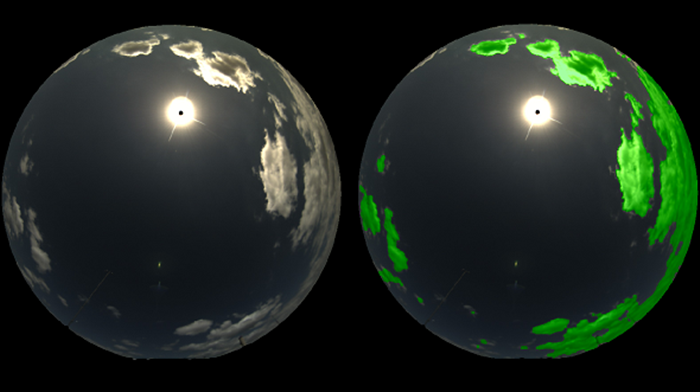 The natural variability of solar radiation often causes fluctuations in power grids. The data from WobaS enable a more efficient feed-in of solar power into the power grid. In particular, rapid changes of the feed-in within short periods, so-called «ramps», can be predicted more accurately. 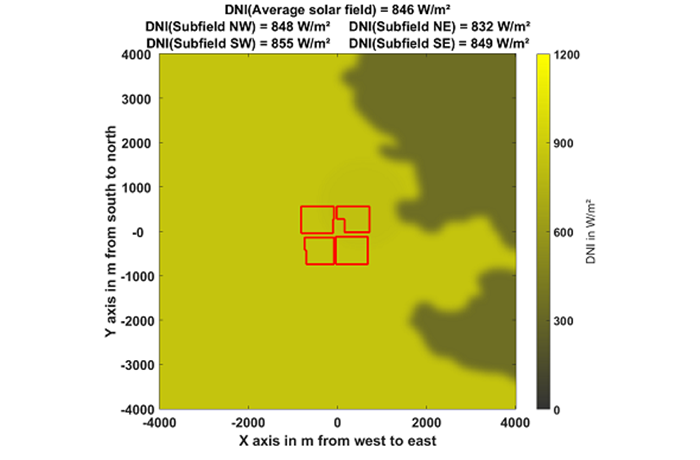 Local irradiation map in W/m2. The outlines of the power plant are shown in red.

If the power plant uses the information provided by WobaS, both the electricity production of the power plant and the service life of the power plant components can increase. «We expect that the use of spatially resolved radiation information at the time of image acquisition will increase the yield of the parabolic trough plants by two percent. If the power plant is also controlled using radiation prediction, further increases in yield are possible», says Dr. Stefan Wilbert, Head of the Solar Energy Meteorology Group at the Institute of Solar Research. The researchers will present the corresponding results at the SolarPACES conference in autumn.

The WobaS system consists of two to four cloud cameras and an evaluation unit. Each of the cameras uses a calibrated 180-degree fisheye lens to take pictures of the clouds above the solar field and its surroundings. Special software uses these pictures to derive cloud properties such as location, height, shape and transmittance as well as their direction of movement and speed. In combination with the existing measured irradiance at the power plant, the WobaS system calculates a map of the current irradiance on the solar field and forecasted maps for the following fifteen minutes. Every 30 seconds, the cloud camera system provides updated radiation maps.

In 2017, engineers tested the system in the commercial solar power plant «La Africana» in Spain in real operation. The WobaS project was successfully completed in 2018. The WobaS system has been installed in two locations in Spain as well as in the Jülich solar tower and in a CSP test facility in Évora, Portugal. CSP Services GmbH offers the WobaS system commercially for CSP as well as for PV power plants. Another application after slight modifications is the research network eye2sky of DLR’s Institute for Networked Energy Systems. More than 30 camera stations are investigating the influence of the weather on the power grids in the region around Oldenburg.

The main goal of the BMWi funded WobaS-A project is the development of innovative, prediction-based operating strategies for solar power plants. The extensive data sets with real measured, high-resolution radiation data is used as a basis.

Furthermore, the project WobaS-A aims to establish an interface to the HeliOS heliostat field control for solar tower power plants developed at DLR, which enables the cloud camera forecast data to be transmitted online. HeliOS uses this information to calculate how the mirrors need to be positioned to maximize the profits. A combination of HeliOS and WobaS could make a solar power plant even more efficient.

CSP-Services already offers cloud camera systems on the market. DLR and its industry project partners will integrate the findings of the WobaS-A project into the current system so that CSP and PV power plants can benefit from the results. The researchers are currently simulating the operation of a parabolic trough system using the information from WobaS. The aim is to make the control concept of the solar power plant more intelligent and to further increase the efficiency. The next step is to test the prototype of this operating strategy in a parabolic trough test facility. After the successful demonstration, it will be transferred to the control center of a commercial power plant. A forecast system in a commercial PV power plant is also planned to demonstrate the benefits of radiation forecasts for PV and to enable optimized operating strategies (e.g. in association with storage).

Starting summer 2019, scientists from various international research centers, universities and companies will compare their cloud camera systems at CIEMAT’s Plataforma Solar de Almeria in Spain. The developers want to use the results to further improve their respective systems.