A new ceramic particle CSP receiver soon to be tested in the U.S. could lower the cost of energy by up to 20% and accelerate industrial heat deployment through particle transport innovations, Reiner Buck, Head of Solar Tower Systems at German Aerospace Centre (DLR), said. 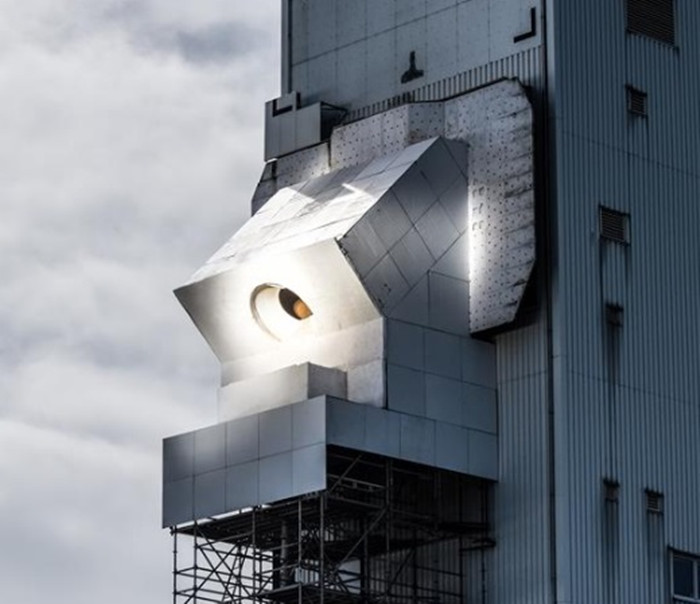 Current CSP tower plants use molten salt as the heat transfer medium (HTM) and storage media, limiting temperatures to 565°C to avoid corrosion and decomposition. A number of research groups are developing systems that achieve higher temperatures and increase the efficiency of converting heat to electricity.

“Preliminary estimations show us that going to higher temperatures from the particle side results in a cost reduction between 10 to 20%,” he said.

CentRec uses a rotating receiver placed atop the tower which exerts centrifugal force to keep dark bauxite particles a sand-like material-- in motion along the chamber wall. This allows direct irradiation of the particles from the solar flux.

Bauxite can achieve an operational temperature range of around 600°C, operating between 400° C and 1000° C, double the range (290 to 565°C) attainable by molten salt systems.

“The main advantages compared to existing technologies are that we can go up to significantly higher temperatures, maintaining high receiver efficiencies and achieving relatively low receiver costs," Buck said. 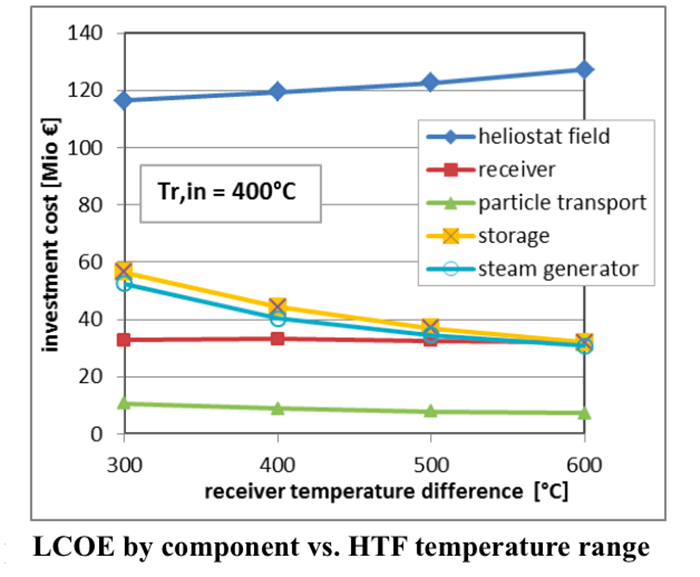 The Centrec concept would likely favor a multi-tower design to attain the capacity offered by current CSP projects, typically over 100 MW.

Unlike molten salts, ceramic particles are not liable to freezing, requiring less anti-freeze measures for tubes and components.

The higher driving temperature difference in the heat exchanger allows a smaller heat exchanger design, and direct irradiation of the particles avoids the need for costly superalloy tubes used for conventional liquid concepts.

The overall cost savings are partially offset by higher costs for the heliostat field and towers. The design requires a reduction in receiver efficiency, requiring more heliostats and a taller tower.

Taking these factors into account, Buck's team estimates that using a 600° temperature difference between receiver inlet and exit can achieve an LCOE of 56 euros/MWh (around $60/MWh). 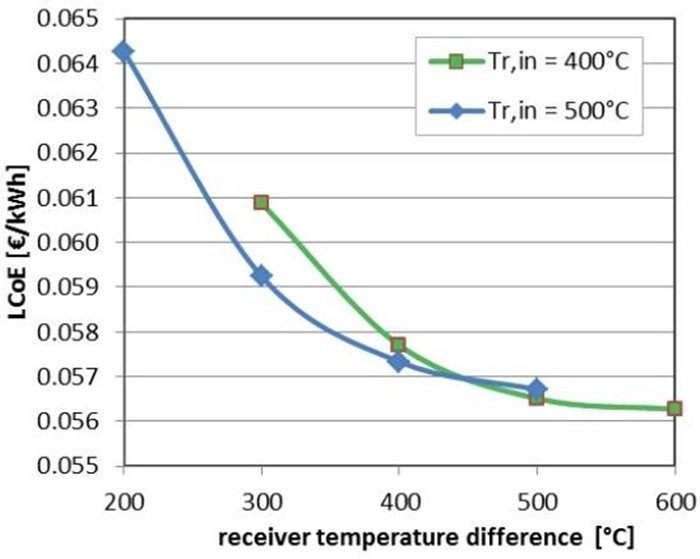 Key challenges for the deployment of falling particle receiver systems include maintaining a constant and sufficient mass flow rate of particles at larger scales, plant reliability for a large rotating receiver system and parasitic energy requirements.

The Centrec partners are implementing a range of projects to tackle these issues, covering areas such as up-scaling, long term operation experience and high flux/high mass flow operations, he said.

One of the main technical risks to commercial viability is the potential degradation of structural materials due to abrasion, Buck said.

"However, in many parts of the system this can be influenced by design parameter (flow velocity, …)," he said.

Following successful testing and scaling up of the design in the coming years, the Centrec concept could potentially be deployed on commercial projects towards the end the 2020s.

Before then, the concept could be used to reduce emissions and drive up energy efficiency in the industrial heat sector. The design could reach market readiness for heat process applications within the next five years, the researchers said.

Instead of using a pipe network, the researchers propose using autonomous trucks to transport insulated containers of particles from the individual towers to the steam cycle power block over 1 km away.

This transportation capability could improve the feasibility of fitting CSP systems to existing process heat facilities at industrial sites.

“A factory which requires a lot of high temperature process heat often does not have useful space directly aside the facility so you can move the solar plant around 1 km away,” Buck said.

This could be a game changer in the Chilean mining industry, where DLR is actively seeking partners for dual heat and power projects.

Dust accumulation around facilities in the Atacama Desert is a barrier to CSP deployment, Buck said.

“Moving the solar facility a certain distance might be a benefit with regards to dust contamination of the heliostat field,” he said.