Microsoft co-founder Bill Gates entered the world of cement this week with a public relations blitz for Heliogen. He’s one of the backers of a new Californian technology startup looking to use concentrated solar power (CSP) to power heavy industrial processes like clinker or steel production. The company says it has concentrated solar energy commercially to levels above 1000°C.

Its process, called HelioMax, uses a closed-loop control system to improve the accuracy of a heliostat system. It says it achieves this by using computer vision software to better align an array of mirrors to reflect sunlight towards a single target. Temperatures of up to 1500°C is one of its targets so that it can apply itself to a variety of processes in the cement, steel, mining, petrochemical and waste treatment industries. It says it can do this for US$4.5/MCF. Another target once it hits 1500°C is to start manufacturing hydrogen or synthetic gas fuels. 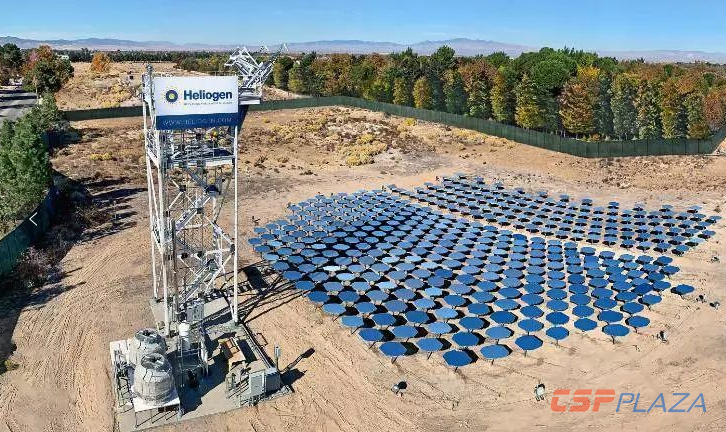 Heliogen’s press release was picked up by the international press, including Global Cement, but it didn’t mention the similar work that SOLPART (Solar-Heated Reactors for Industrials Production of Reactive Particulates) project is doing in France. This project, backed by European Union Horizon 2020 funding, is developing a pilot scale high temperature (950°C) 24hr/day solar process for energy intensive non-metallic minerals’ industries like cement and lime. It’s using a 50kW solar reactor to test a fluidised bed system at the PROMES (PROcédés, Materials and Solar Energy) testing site in Odeillo, France.

Heliogen’s claim that it can beat 1000°C is significant here but it doesn’t go far enough. Clinker production requires temperatures of up to around 1450°C in the sintering phase to form the clumps of clinker. SOLPART has been only testing the calcination stage of clinker production that suits the temperature range it can achieve. Unless Heliogen can use its method to beat 1450°C then it looks likely that it will, similarly, only be able to cut fossil fuel usage in the calcination stage. If either Helopgen or SOLPART manage to do even this at the industrial scale and it is cost effective then the gains would be considerable. As well as cutting CO2 emissions from fossil fuel usage in cement production this would reduce NOx and SOx emissions. It would also cut the fuel bill.

As usual this comes with some caveats. Firstly, it doesn’t touch process emissions from cement production. Decomposing limestone to make calcium oxide releases CO2 all by itself with no fuel. About one third of cement production CO2 emissions arise from fossil fuel usage but the remaining two thirds comes from the process emissions. However, one gain from cutting the amount of fossil fuels used is a more concentrated stream of CO2 in the flue gas. This can potentially reduce the cost of CO2 capture and utilisation. Secondly, concentrated solar power systems are at the mercy of the weather, particularly cloud cover. To cope with this SOLPART has been testing a storage system for hot materials to allow the process work in a 24-hour industrial production setting.

Looking more broadly, plenty of cement producers have been building and using solar power to supply electricity. Mostly, these are photovoltaic (PV) plants but HeidelbergCement built a CSP plant in Morocco. Notably, PPC Zimbabwe said this week that it was building a solar plant to supply energy to two of its cement plants. It is doing this in order to provide a more reliable source of electricity than the local grid. India’s Birla Corporation has also said that it is buying a solar energy company today. The next step here is to try and run a cement plant kiln using electivity. This is exactly what Cementa, HeidelbergCement’s subsidiary in Sweden, and Vattenfall have been exploring as part of their CemZero project. The pilot study demonstrated that it was technically possible but only competitive compared with ‘other alternatives in order to achieve radical reductions in emissions.’

None of the above presents short or medium-term reasons for the cement industry to switch to solar power in bulk but it clearly deserves more research and, critically, funding. One particular strand to pull out here about using non-fossil fuel powered clinker production systems is that it produces purer process CO2 emissions. Mounting carbon taxes could gradually force cement plants to capture their CO2 but once the various technologies above become sufficiently mature they could bring this about sooner and potentially at a lower cost. In the meantime the more billionaires who take an interest in cement production the better.