Algae is a potential energy feedstock that is synergistic with solar fuels because algae can be grown in salt water on cheap desert land with a good solar resource, and it also contains the hydrocarbon chemicals needed for making solar fuels (hydrogen, carbon, and oxygen). Research is ongoing into reducing the cost of farming algae.

To then use solar thermal energy to convert farmed algae to fuel, the solar fuels research team at Australian National University (ANU) led by John Pye, together with Mahesh Venkataraman propose a new process, detailed in their paper Modelling of a 50 MWth On-Sun Reactor for SCWG of Algae- Understanding the Design Constraints.

Pye’s group further described the dynamic process model used in this research in a second paper: System-Level Simulation of a Solar-Driven Liquid Fuel Production Plant via Gasification-Fischer–Tropsch Route and both were presented at the SolarPACES 24th conference in Morocco

Thermochemical production of solar fuels is an advanced technology being developed in national laboratories around the world. Mirrors concentrate thousands of reflected “suns” onto various kinds of solar reactors to achieve very high temperatures, up to 1500°C. Solar reactors are used to carry out heat driven industrial processes, and for solar thermochemistry to rearrange molecules to make hydrogen, or to make hydrocarbon fuels like petrol, diesel and jet fuel.

In the process proposed by the ANU researchers, the solar heat is used to gasify biomass at temperatures up to 605°C. Concentrated solar radiation is used to heat a high pressure algae and water slurry, and the combination of pressure and temperature breaks down the algae bio-molecules into synthesis gas which can then be converted into gasoline.

However, algae is a very “messy” biomass feedstock, and designing a solar reactor to gasify it is a challenge. “Algae is a really complex chemical thing, it is actually many different chemicals all mixed up,” Pye pointed out.“Though in this process we don’t actually care very much about its exact structure. All that really matters to us is how much carbon and how much hydrogen and how much oxygen is in there. All of the complex chemistry of the algae just breaks down under the supercritical water conditions when we add heat.”

The process begins with SCWG, a next-generation thermochemical conversion technology for a faster chemical conversion with little waste, in which pressurized water and algae are heated using solar energy to make them go supercritical – a phase which has very different properties compared to room temperature water. SCWG has been proven at lab scale for converting organic feedstock into a gaseous fuel mixture containing CO, CO2, hydrogen and methane. It would also be ideal for a wet feedstock like algae.

The ANU researchers focused their expertise in solar fuels on algae because it could be farmed in Australia’s sun-drenched deserts with the abundant low-cost space needed for solar fields of heliostats to provide the heat for the reaction. Producing a solar fuel from algae required them to figure out how to design the entire process, including following up the solar SCWG with a modified Fischer-Tropsch (F-T) unit for the conversion of the synfuel into a liquid fuel.

How the solar reactor would work with algae
As with other solar reactors for solar fuels, heliostats would form a polar arrangement in front of a tower, enabling much more highly concentrated ‘suns’ to achieve relatively high temperatures with low flux on the receiver tubes.“The way to achieve this is to have a deep cavity with a lot of tubes spread out on the inside cavity and with a cavity you end up naturally with this kind of polar heliostat field layout,” Pye explained.

In solar reactors, heliostats focus and concentrate sunlight into the receiver atop the tower to concentrate heat to force a chemical reaction, in this case, at a pressure of 24 MPa and a receiver wall temperature of up to 800°C, for a liquid temperature of 605°C to heat a wet algae mix concentrated from the nearby algae pond.

“You need to concentrate the algae solution enough for the reactor to be efficient and then you take this solution up the tower,” said Venkataraman. “The algae starts to gasify in the high temperature and pressure and starts forming syngas which can be converting to liquid fuel.”

“The gases produced during gasification are rich in hydrogen, methane and carbon dioxide. You condense that mixture and you can separate out the water and circulate it back to the algae ponds to grow new algae. To convert it into syngas (a mixture of carbon monoxide and hydrogen) with appropriate composition for downstream F-T, a solar-driven steam methane reformer is used.”

The syngas is then sent to a big gas storage tank under pressure, to store it for forwarding to the F-T process that converts the syngas to liquid fuel in another set of reactors and heat exchangers. Storing the gas first ensures it can feed the F-T process steadily round the clock without disruption when the sun goes down. 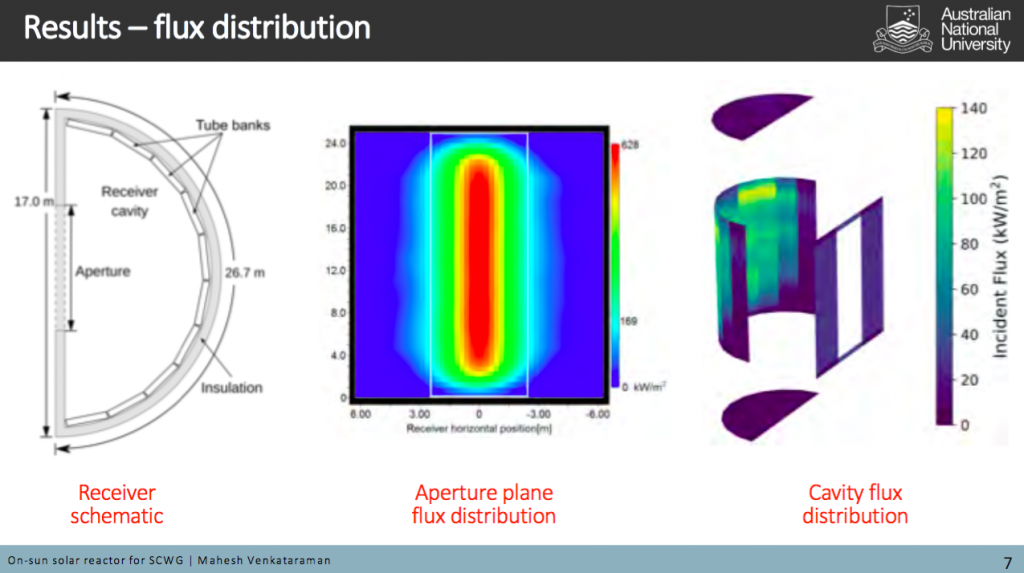 The F-T process will need to be different from the very large commercial facilities now serving the fossil fuel industry.   Because of their very large size, conventional F-T reactors take a lot of time to warm up and cool down. This means they can’t ramp up easily, and if there is no sun for too long; then the syngas storage tank will become empty. So several researchers and companies around the world are working on new small scale F-T reactors, including microchannel/microtubular designs, better suited to solar fuels.

“We would use a microtubular reactor that could handle transients better than the conventional reactor,” he said. The rest of the process would have the same layout as a F-T facility; the distillation column, the hydro-cracking reactor and the reforming reactor.

Challenges to solve include balancing the costs by finding the most cost-effective compromise between ramping frequency and storage. “Syngas storage is expensive. It is a matter of finding the trade-off where you have enough storage to run most of the time but you still have to ramp up and down a little bit, for example, in winter, when it’s hard to get your storage full,” Pye explained.

This new small and more nimble micro F-T reactor design could have commercial possibilities.“We think that if the micro F-T concept works, that could lead to quite a competitive system at a smaller scale,” he said. “So we are hoping that that possibility opens up.”

Pye envisions a number of solar plants positioned near a central liquid fuel processing plant. “We are not talking about huge distances of transport of gas. “The idea is to have the F-T, solar and algae all in reasonable distance of each other.”

Next: adapt their system for a less costly feedstock

The team has been trying to see whether each step of their algae-based system works perfectly. To do this they have modeled how the different units – the transient solar field, the gasification reactor, the storage, and the micro F-T process – all integrate with each other.

Pye’s group at ANU has shown the techno-economic feasibility of liquid fuel production process via solar driven supercritical water gasification and the solar F-T route. The process has been optimized and the levelized cost of fuel (LCOF) production using this technique comes out to be ~3.2 AUD/L of gasoline equivalent.

That means that their solar algae fuel would cost about three times the 2018 cost of gasoline in Australia. But the currently high cost of algae farming itself accounts for much of this high LCOF. The completely carbon neutral solar process that these researchers have developed would become competitive if the cost of farming algae comes down (or the carbon price goes up).

In the meantime, the team will next work towards a modified system that could process a potentially cheaper waste biomass feedstock, such as bagasse (sugarcane waste pulp).