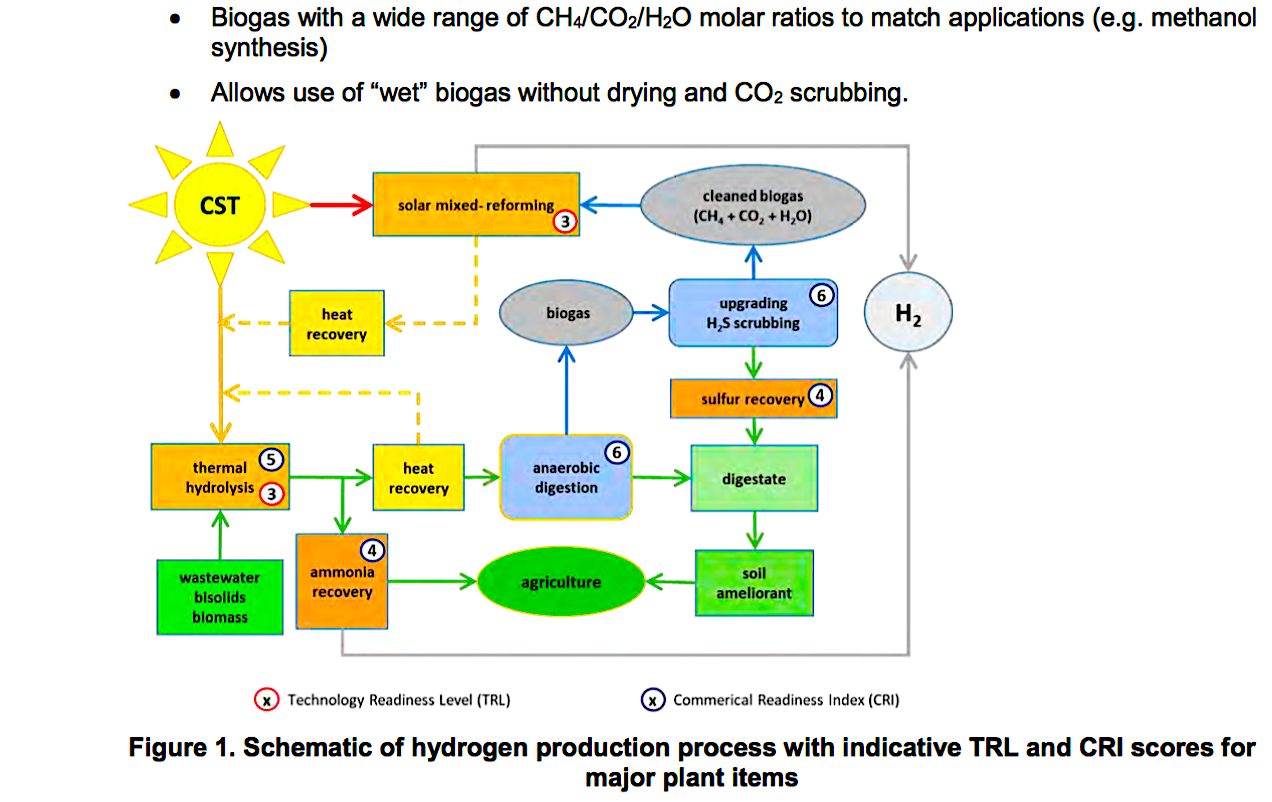 A solar process that is similar to gas reforming for producing hydrogen from wastewater IMAGE @Adrian Dawson, CSIRO

A preliminary study of the average cost of a novel process for producing solar hydrogen in several locations in Australia finds it could come close to the US DOE renewable hydrogen target of $3 per kilogram.

The way that hydrogen is reformed from natural gas is a well-established, low-cost process. But greenhouse gases are emitted twice, first in extraction, and then in combustion of natural gas.

Instead, a solar hydrogen process would replicate the process for traditional reforming of natural gas but substitute bio-methane from municipal wastewater or agricultural crop residue as the chemical feedstock instead of methane from natural gas, and substitute heat at 800°C from a Concentrated Solar Thermal (CST) reactor, instead of heat from the combustion of natural gas.

The study finds that solar hydrogen produced this way in Australia would have a much lower cost than the current renewable method; splitting hydrogen (H2) from water (H2O) through electrolysis. Research is also under way globally on a more efficient two-step CSP process using solar reactors to supply very high temperature heat to produce solar fuels like jet fuel or hydrogen.

“CSIRO has done a lot of world-leading work on solar reforming of natural gas. We take CH4 , methane, natural gas from out of the pipeline and feed it into the solar reactor where the reforming process takes place,” said Wes Stein, who heads up solar energy research at CSIRO.

“What we need to do now is to move to using a biomass as the source instead, so it’s green hydrogen. And then, anaerobic digestion; production of gas from wastewater or sewage or landfill or abattoirs and piggeries is also pretty well known by the biomass industry. So you’ve got two technologies that are both reasonably well demonstrated, plus our well-researched solar reactor. And then if that CH4 will now come from biomass; the solar reactor is not going to know it’s not from natural gas.”

The treatment of waste currently represents a cost, but extracting hydrogen from the chemical mix is of increasing interest globally.The US National Renewable Energy Laboratory (NREL) estimates that over 4 million tons of hydrogen could be produced from waste bio-methane sources in the US. 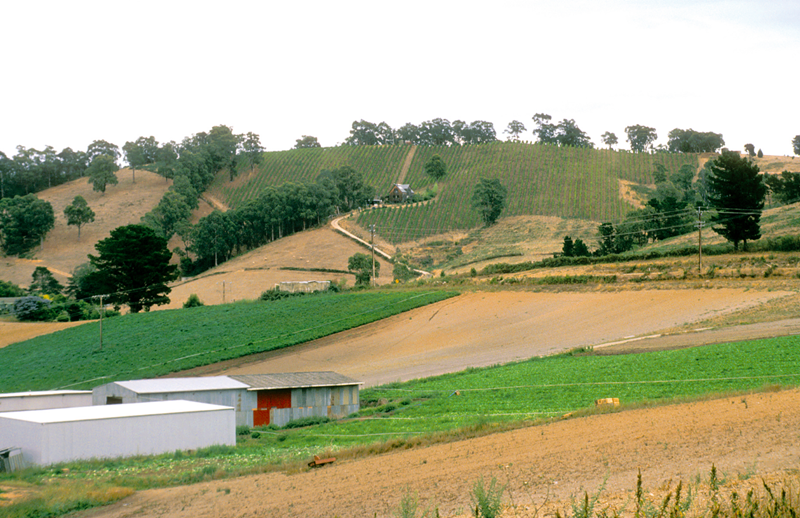 This method of making solar hydrogen from agricultural crop residue would already be 100% renewable, with net zero carbon, because biomass removes CO2 while it’s growing, replacing CO2 emissions at the plant. But if, in addition CO2 was captured at the reforming plant, it would actually make this process even better than 100% renewable, explained Stein: “Because then you would be effectively absorbing additional CO2 out of the atmosphere, actually making it even cleaner than a 100% renewable fuel.”

With a pure hydrogen fleet some years away, Stein believes an intermediate option for utilizing the solar reforming process would be to make a transitional fuel like bio-methanol which when it is made from wastewater would count twice towards the EU’s renewable fuels targets, .

“With this same solar reforming process instead of natural gas reforming, we can also make liquid fuels such as bio-methanol, jet fuel, or diesel,” he pointed out. “So we can make a drop-in fuel now that is better than what we have at the moment, and we can start to make an impact on transport CO2 immediately.”

The economics of producing solar hydrogen from wastewater

The paper; A Concentrated Solar Process for the Production of Renewable Hydrogen from Waste Water Streams is one of many studies conducted under CSIRO’s Hydrogen Future Science Platforms. The costs are calculated based on estimates from the Roadmap to Solar Fuels, published by ARENA, Australia’s renewable energy agency.

“We set out to see if it’s in the ballpark of a reasonable derived cost of hydrogen,” said Adrian Dawson, one of the co-authors of the study, and senior engineer at CSIRO, where he has been involved in engineering energy storage, carbon capture and supercritical CO2 power cycles in CST.

To find an average Levelized Cost of Hydrogen (LCOH), the researchers compared two locations in Australia with very different bio-solid waste streams, one from municipal and meat industry waste, one from agricultural waste such as crop residue.

Australia’s larger regional towns tend to have have access to good sources of municipal waste water as well as biosolids from agricultural crop residue. And Australia generally has good solar resource as well as plenty of vacant land to site the solar field.

Anaerobic digestion for thermal hydrolysis of wastewater already exists commercially. “This is a steam process which is commercially available from a number of manufacturers so there is nothing novel there,” said Dawson.

“Essentially it’s a pressure cooker on an industrial scale. You pass the biosolids sludge through the process and it heats the sludge to around 165°C and it then goes through a series of depressurization where you get a destruction of the bio-solid material down at a cellular level which then makes the bio-solid more readily digestible. You get a higher efficiency in an anaerobic digester, and a potentially higher biogas yield.”

To replace the heat from natural gas combustion, in the second process the higher temperature required would be supplied by a solar reactor at the focal point of a solar field of heliostats. (Solar reactors, which are specially designed for thermochemical processes, like making solar fuels can attain temperatures up to 1500°C.)

For this process, the solar reactor would supply 800°C heat for the mixed methane reforming step and then waste heat from that process would be captured for the thermal hydrolysis step, which uses lower grade heat.

Closer to US DOE green hydrogen target of $3/kg

This solar hydrogen process would pencil out at between $3/kg and $5/kg in USD. As of 2018, PV electrolysis of water to produce hydrogen costs around $11/kg, so this method would bring costs closer to meeting the US Department of Energy target of $3/kg.

“Our preliminary analysis indicates that this method of producing hydrogen could be cheaper due to lower capital costs compared with other water-to-hydrogen pathways,” Dawson confirmed.

With two of the three technologies are already proven commercially, only the solar reactor has yet to be demonstrated commercially. Stein believes that the time is now right to take that next step towards commercialization.

“We are at the point where the next logical step in this progression would be a few megawatts scale as a pilot demonstration with industry involvement, and hopefully petrochemical companies in there,” he said. “Maybe these would be companies from the Middle East MENA region interested in greening up their fuel production.”